There's a particular game design I've had in the back of my head for a few years now. A sci-fi cooperative shooter. Originally the idea was mash up of Left4Dead and Phantasy Star Online. Valve's cooperative shooter was the first time I'd seen a game so successfully engender team work, and was still a very immersive experience. The 'AI director' tech meant it took a lot longer before it was the norm to game the systems. I played PSO on the Dreamcast a few years earlier, and enjoyed the world, particularly the first few levels, the aesthetic and the space opera feel of the main story, even if the mechanics were a little clunky.

Sometime after playing L4D I found Alien Swarm , a free top down shooter from Valve with a strong 'Aliens' vibe, it seemed to incorporate similar swarming logic in it's enemies along with class specific mini-games. The fact it had classes and was a softer coop made it naturally closer to PSO, and yet still had the high skill ceiling / potential for mastery of the first person shooter which PSO had lacked. So the design shifted to being closer to a mash up between Alien Swarm and Phantasy Star Online. 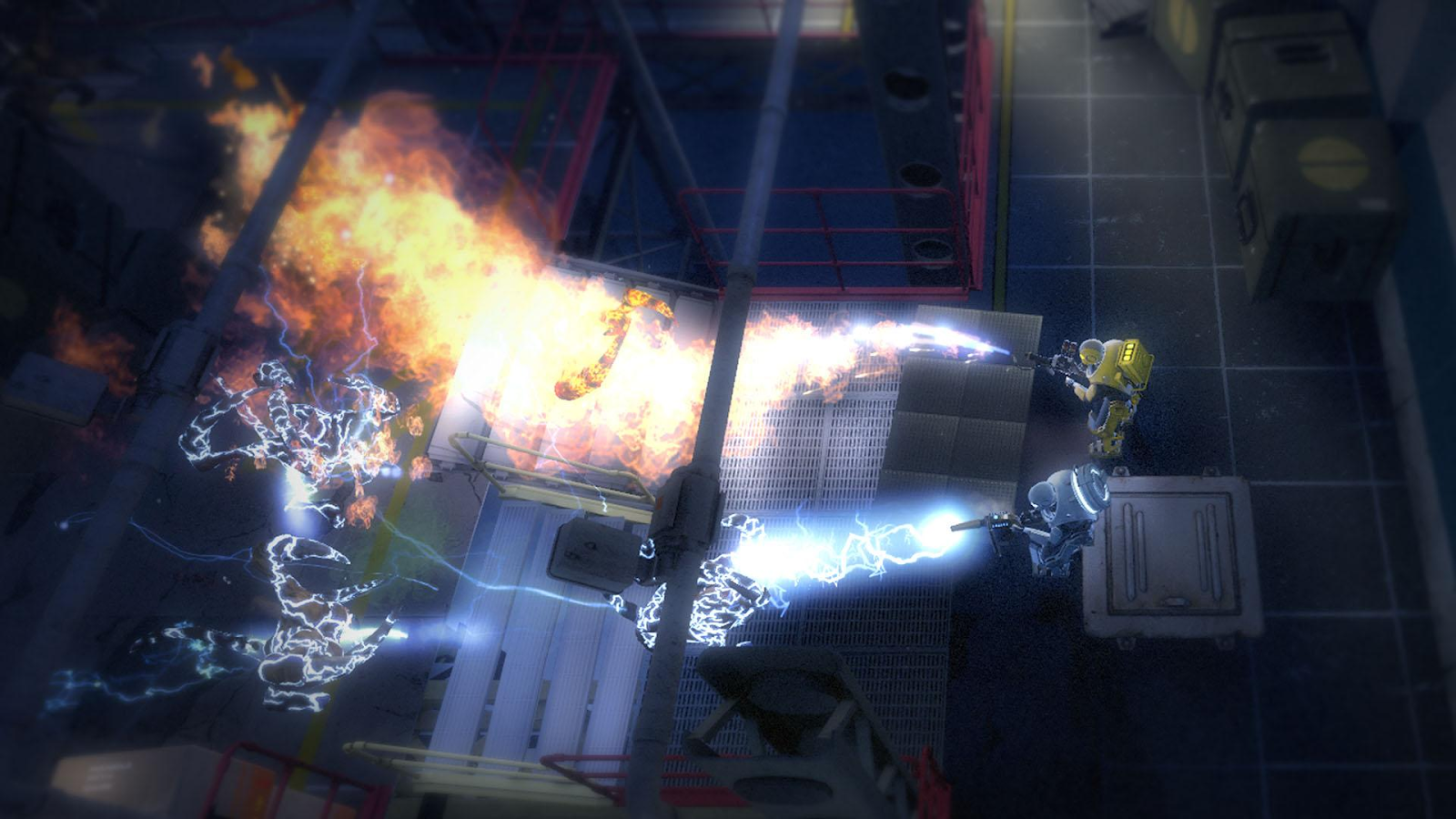 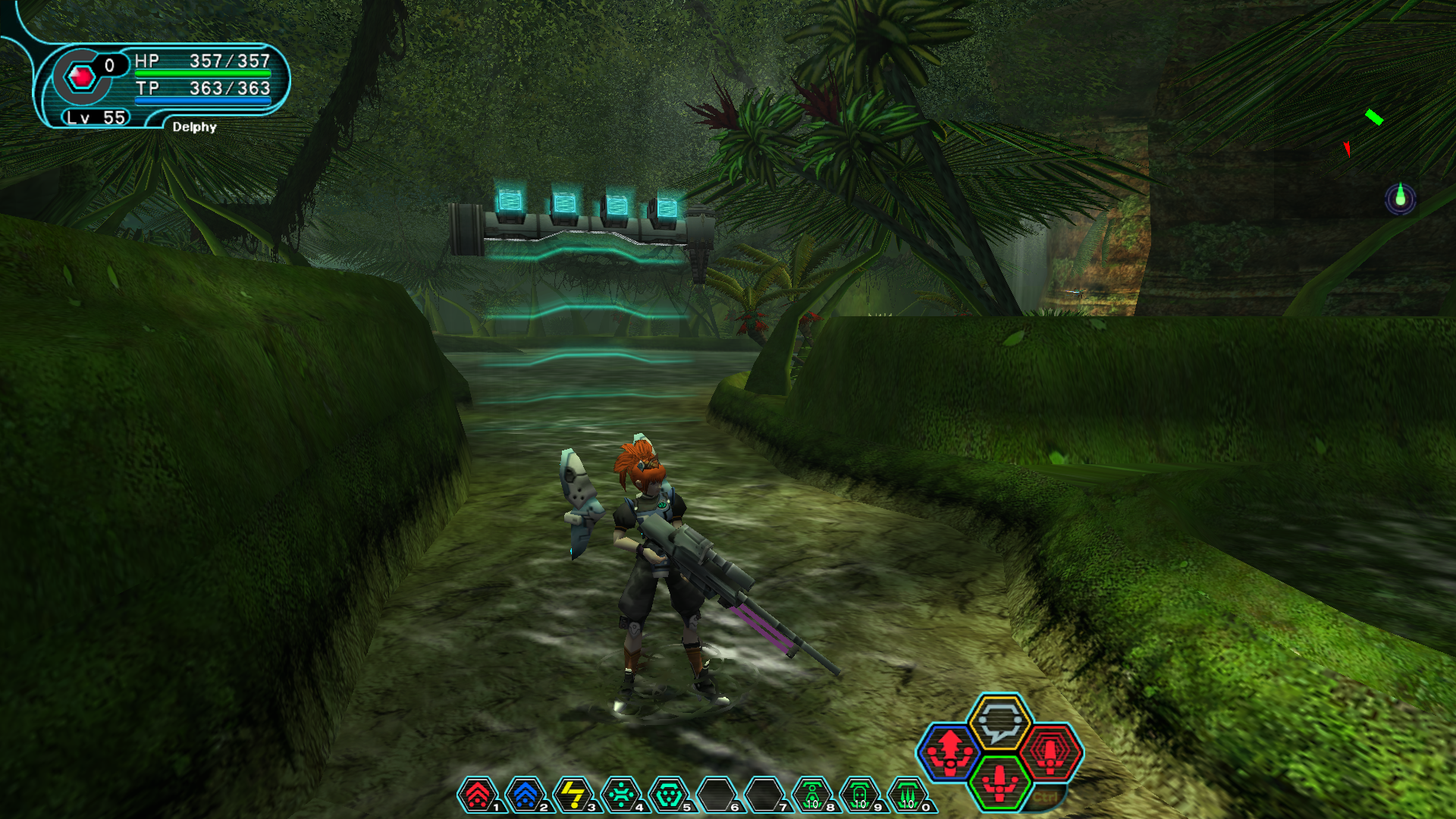 A quick aside, you can still play both Alien Swarm and Phantasy Star Online for free, and I would recommend doing so! Replaying Phantasy Star Online has been an interesting experience for me, the story and tropes employed in the side quests are quite dated and some are kind of problematic and whilst it suffers less than a lot of even modern shooters and MMOs, it does have some *ehem* interesting choices for some of the female characters costume designs. That said whilst the story hasn't aged well, I feel the mechanics and cadence of combat are far more compelling than I gave them credit for when I played as a teenager, that was probably the then Counter-Strike player thinking anything that wasn't twitch / reaction based wasn't really testing skill, although admittedly I still love twitch based games.

Having spent quite a lot of my spare time over the last few years making game prototypes, but not this one as I felt it was too ambitious to achieve, I decided it was time to try anyway, perhaps part of the issue with my difficultly finishing projects was I was focusing too much on what I thought I could achieve versus what I actually wanted to make.

After creating a placeholder player that turned to face your cursor with slight delay out of a pair of cubes (the top cube looking at the aim point gives a surprising amount of character to it), I followed and adapted a FPS UNet tutorial to set up basic networking - client hosted with an authoritative host - which was surprisingly easy to get working. The tutorial did seem to want you to write almost every script as a network aware script but I ended up moving towards having a single script per character to relay messages and commands with individual components focusing on their own responsibility. 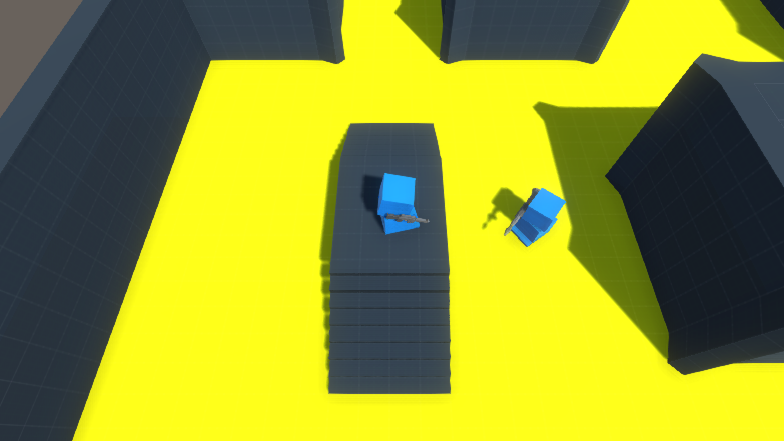 I created a test level out of Unity's prototyping geometry, and a basic system for spawning enemies who seek the nearest player and deal damage in a cone in front of them. Once all enemies in an area were killed the doors would unlock and the player could continue. At this point I discovered that UNet's high level API does prediction and interpolation for you on Network Transforms that have a character controller component on but not for other Networked Transforms, it turns out you can avoid having to write your own by attaching that component on non-host clients.

I also proved out a few different weapon types (burst fire, mini-guns, grenade launchers) and bought a humanoid 8-way run with independent aim animation set and got that working with characters who's movement is not controlled by root movement of the animations. Using the animation root movement may look good, but generally feels unresponsive which isn't really what you want in a top down shooter.

This all sounds like solid progress right? Well quite, but then it got to the point of needing to take another pass on the enemies, which were not intended to be classically humanoid. At least point quite how much I had been relying on what I already knew how to do, or could buy off the asset store became clear. So I stopped to take stock, it had been a few months of spare time at this point. I was quite happy with the prototype as a prototype, it was quite clear the progress was going to slow down significantly as I would have to either skill up or bring in other people to help and if I was serious about trying to make this it was going to be years.

As you can guess from this being a retrospective, I wasn't quite ready to commit to that and was worried that skilling up on this project that I cared about so much would compromise it's quality, and previous attempts to form a team to make a game had resulted in drama and bad feelings and being in a lead role for client development in work at the time I didn't feel like doing something that looked even more like day job during my spare time as well.

This lead me onto my current Unity project, which I'll talk a bit more about in a future post - but it embraces reliance on pre-built assets, and should allow me to practice the polish (and you know finishing a game) aspects of game development, as well as getting to make features I've not created before but would be relevant to this game as well, say like character customisation.

I was making all this in Unity 5.6 as I had a perpetual licence, and the new versions of Unity hadn't provided any killer features I felt would help the particular games I was trying to make. Over the last few months this has changed, particularly ProBuilder becoming integrated into the editor, improvements to the terrain system landing in 2018.3, and the decal system on the newly released FPS sample project are all very interesting and potentially useful to this type of project. The other major development is that UNet is being phased out, however the replacement has yet to be revealed and whilst the forum threads state it will still be possible to run p2p client hosted games it remains to be seen how straight forward this will be when the focus seems to be on providing infrastructure as a service.

I'm hoping to revisit this project in future, when the new networking technology from Unity becomes available, and when I've had the opportunity to practice some of the areas of develop I don't get to focus on as much in my day job. I hope to blog about that project I'm using as a practice soon.